The manufacture and Installation of a rotating, sunken sofa in Mayfair

During the redesign of this very traditionally laid out flat, it became clear to the design team of Jon Elworthy Design, and Jane Duncan Architects, that the client’s brief was actually asking for a more open plan layout, and not the “corridor with boxes off it” that the client had viewed on visits to other flats in the apartment block.

With this in mind, we felt we had to balance the through flow of the open plan areas and, make use of the space created without filling them up with furniture and fittings.

It was Jane Duncan, lead architect (and at the time RIBA President), who came up with the concept of a circular sofa to act as a hub, or “roundabout” between the bedroom suites and the main living areas.

Jon Elworthy produced the concept drawings, and a CGI visual of the area for discussion with the client, which he immediately liked, and instructed us to proceed. We originally proposed that the sofa should be mounted on a car turntable, allowing the sofa to revolve via a remote control which would also be linked to the sub floor mounted TV lift, and the motorised curtains. There would have been three settings, one for party use, one for TV viewing and the last for looking at the stunning views over Mayfair to the BT Tower.

Unfortunately, due to weight-loading issues we were unable to install the sofa on the turntable so the remote just operated the TV and the curtains. Obviously this was disappointing but with the expertise of OB&B, the favoured furniture specialists, we were sure we could come up with a smooth, easily moved “manual” system to allow the sofa to rotate. 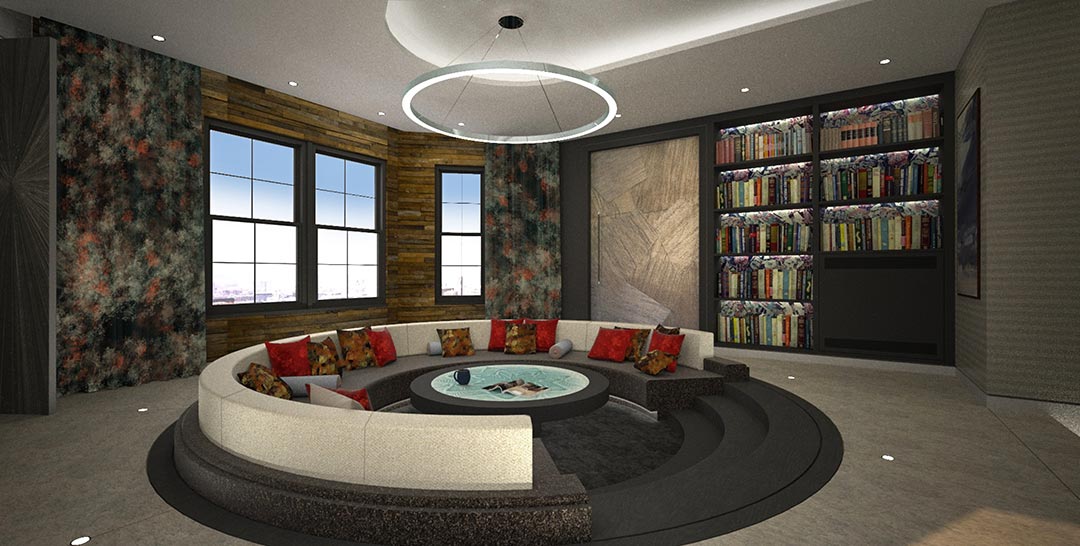 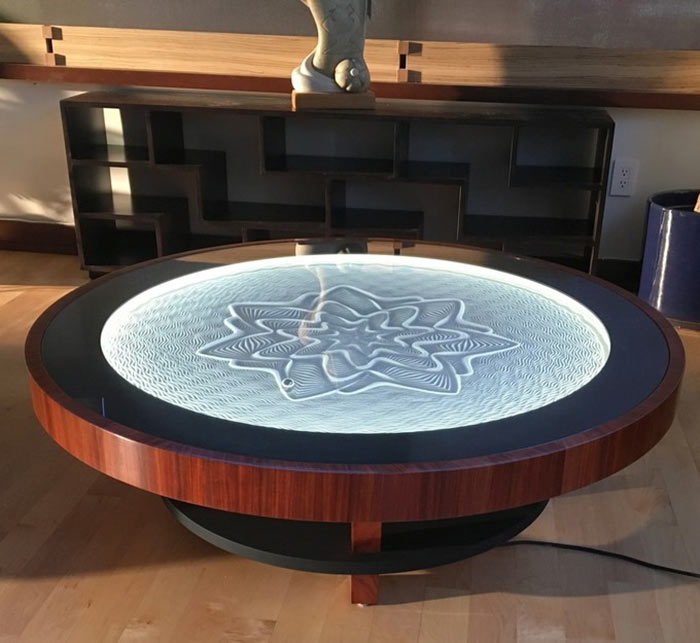 In addition to the weight of the sofa and the turntable, there was also extra loading issues created by us proposing the installation of a Sisyphus table.

This table has just been created in the US, via crowd funding, and uses a, computer program controlled magnet/steel ball bearing in a bed of fine sand to form infinitely complex shapes. Unfortunately, it is taking a long time for the company to work through the Crowd funded pre-orders, but we hope to place the final order for the table for the flat sometime during 2019.

On instruction OB&B took Jon Elworthy’s drawings, and started to work up the details for our approval, prior to the construction of mock-up sections and prototypes for the running gear. These took several weeks to construct, with Jon Elworthy of Jon Elworthy Design, travelling to their factory in the Midlands to review them.

The video above shows a full section of the upholstered seat, track and base section. At this stage it was still a case of trial and error, because of the weight issues. There were also some concerns about the stability of the step section, in particular whether this lighter section of the installation, would affect the smooth easy running of the wheels in the track.

Conversely, we were also concerned that the sofa may run too well, and so it was decided to add 3 no. locating ball socket units. See diagram below 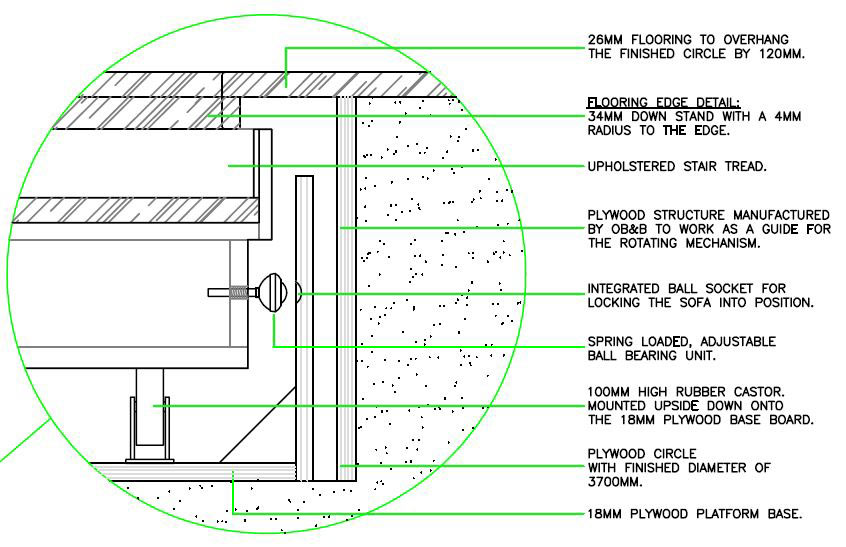 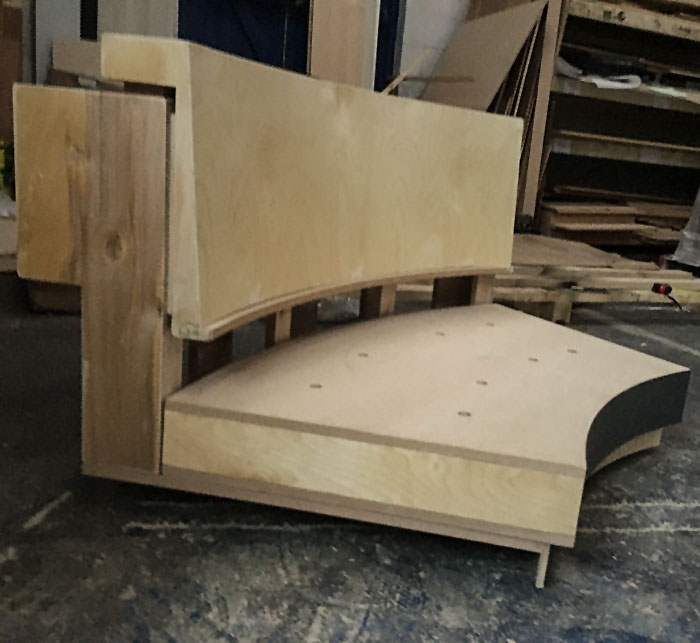 The base, in the raw

On review of the prototypes, and our acceptance of several changes suggested, Jon Elworthy Design gave OB&B instruction to progress to the upholstered mock up that would be shown on site to the client. Jon Elworthy Design gave OB&B the fabric reference for the leather, and chose the seat and base fabrics from their excellent showroom selection. It was agreed that the site mock up would be upholstered in more budget fabrics and leather! The final leather selection was from Alma Leather, who were also supplying and fitting the leather floor in the Master Bedroom, which will be the subject of a future case study.

OB &B offered up a full quadrant of the sofa for the client to approve the “comfort” of the sofa also to check, and set the final levels. Blueridge Flooring attended site, and confirmed the tolerances that we had set were acceptable, and they so they were able to progress the radiating wood flooring. A design revision was made to the riser of the steps, in that they would now be in the same leather as the sofa with a stainless-steel strip to the top of each riser to act as a visual break, and as protection for the leather. 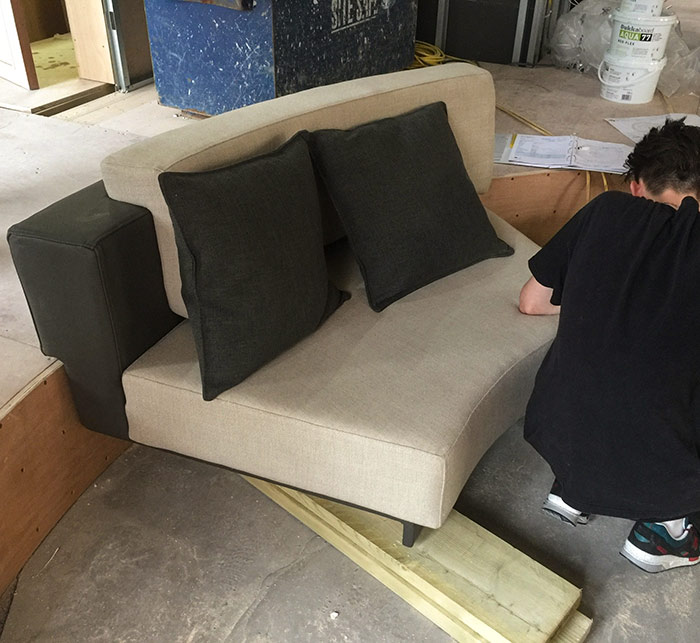 The upholstered mock up installation.
It was agreed that the next site meeting would be to review a fully upholstered, final quality section of sofa.

This photograph shows the sample section fully finished and upholstered. The quality of work was commented on as being excellent. A revised program was agreed with the main contractor, the flooring specialist and OB&B. 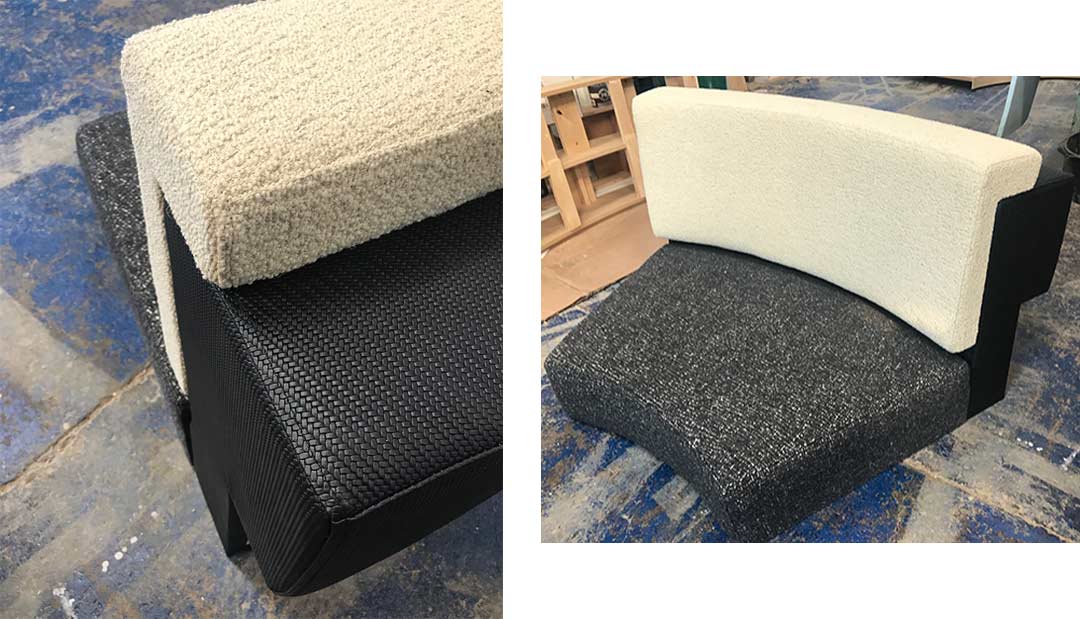 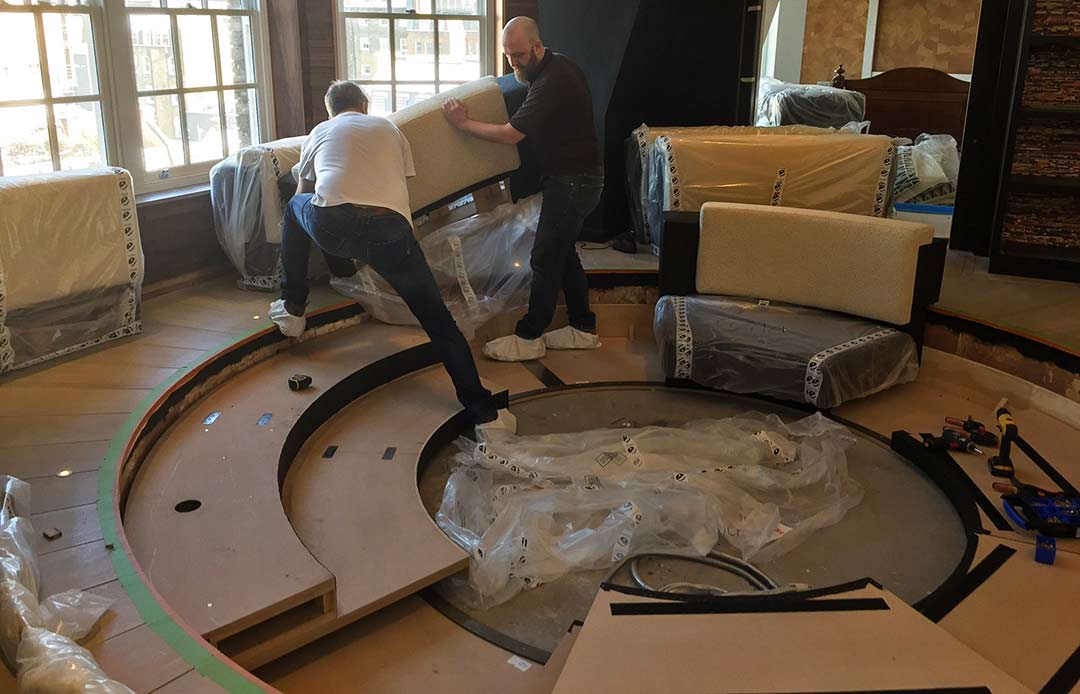 Richard Berry (MD of OB&B) and Mark Winter installing the sofa. It was nice to see the main man getting out of the boardroom and on site!

And so to the final installation….

The finished sofa was booked in to be one of the last “topping out” pieces on the project. However, on the day, when we saw all the other trades rushing to finish their works we felt that it was still to early.

Jon Elworthy Design found the process of working with OB&B very enjoyable, and we would recommend them for any bespoke furniture projects you may have in the future. We will certainly be using them. Contact OB&B 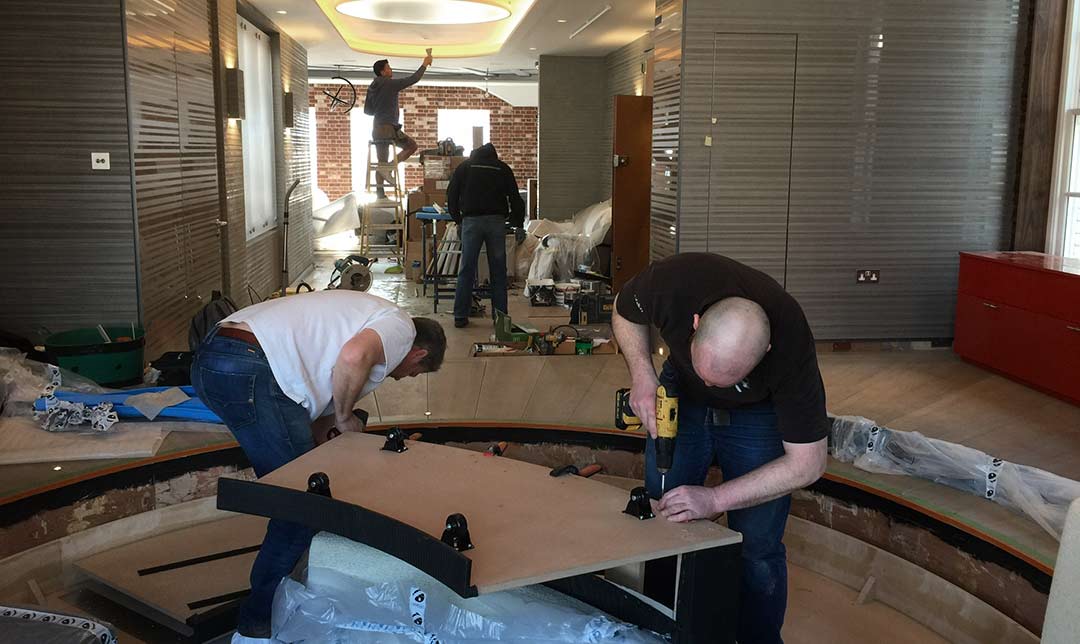 On completion of the installation it became clear that the sofa was heavy, or rather stable, enough to do without the locating ball bearing “lugs”.

Although it would have been a bit more “007” to have the remote-controlled turntable, it was not to be for this contract. However, we hope to be given the opportunity of trying to achieve the full concept for another client on another project. 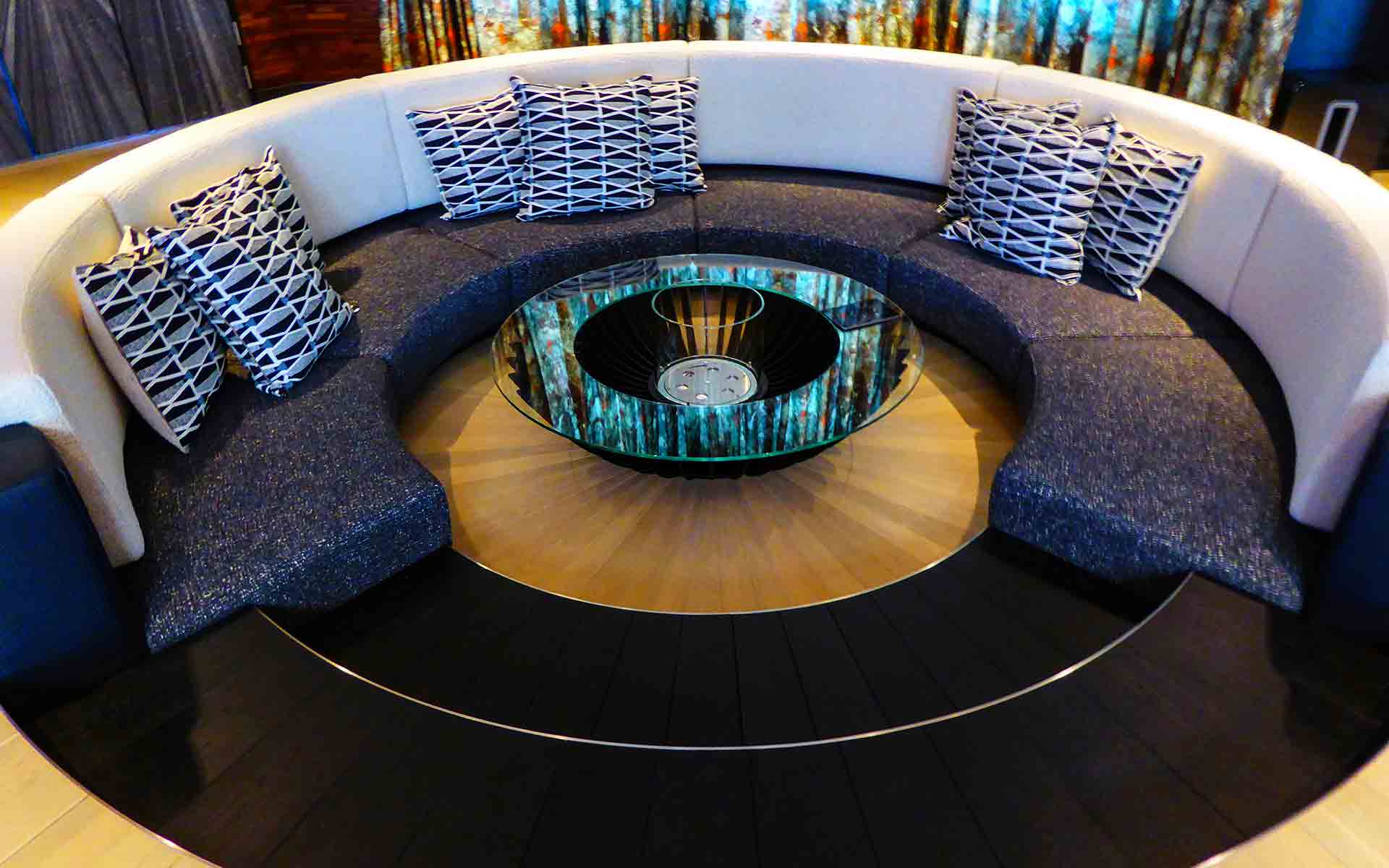 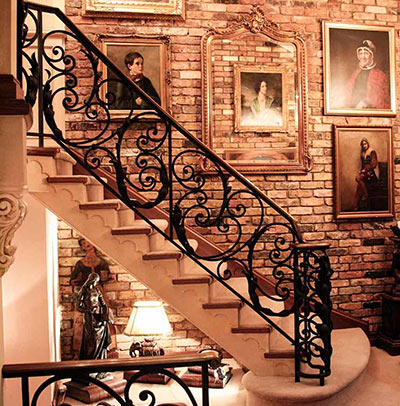 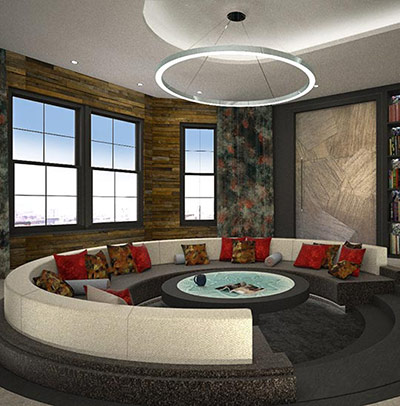 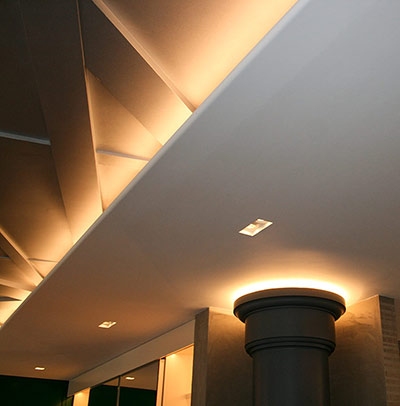